Space ship two, officially names VSS Enterprise Completed it’s second Captive test flight over the Mohave Desert Sunday May 16th All test goals where achieved in this test flight. Spaceship two was pressurized and powered by the mother ship and climbed to 51,000 ft .The ship was flown to that altitude to test its flight worthiness and to test it’s descent from a space flight.

The spaceship is powered by a hybrid rocket motor. This type of system is not a new idea but offers important safety and environmental advantages over liquid or solid systems that are more commonly used on manned space vehicles. In particular, it means that the pilots will be able to shut down the SpaceShipTwo rocket motor at any time during its operation and glide safely back to the runway.

Spaceship two will be taken aloft by the Aircraft, White knite 2 ,A dual fuselage 4 enginged aircraft with Space ship two nesseld in between the two fuselages. Each of WhiteKnightTwo's fuselages has a dihedral wing and the spaceship will be placed centrally between them, where the wing tips are joined at the highest point of this elongated 'W-shape' wing. With its fuselages some 50ft apart, WhiteKnightTwo's payload area is large and readily accessible from the ground - an open architecture approach which maximizes its future utility. The extraordinary result looks appropriately out of the ordinary, as one might expect from a piece of 21st century space launch hardware. 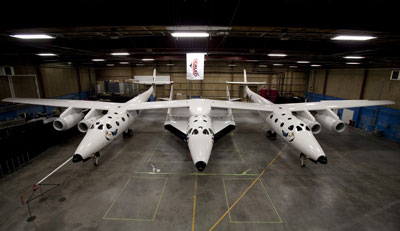